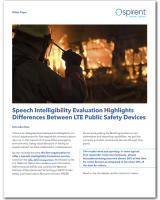 Speech intelligibility is a critical requirement for first responder communications devices. In the real world of noise-filled emergency environments, being misunderstood or having to repeat oneself can have catastrophic consequences.

Spirent recently became the first organization to offer a Speech Intelligibility Evaluation service based on the ABC-MRT16 algorithm developed by the U.S. National Telecommunications and Information Administration (NTIA). Following a rigorous test methodology, we conducted a benchmarking study to compare the intelligibility performance of four commercially-available public safety LTE devices.

This white paper gives an overview of the requirements, insight into the methodologies used, and comparisons in the performance of the four devices, without specifics on manufacturers and models. The results were unpredictable, eye-opening and prove that superior quality is still achievable in harsh conditions.