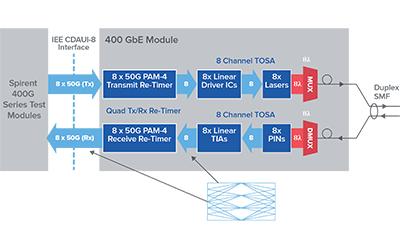 When work began on 200 Gbps and 400Gbps Ethernet in the IEEE’s 802.3bs study group five  years ago, multi-level modulation was viewed as a potential substitute at high speeds for the widely used and well-characterized Non-Return to Zero (NRZ) modulation, common at both 10Gbps and 25Gbps. By 2015, however, the IEEE had mandated the use of four-level Pulse Amplitude Modulation (PAM4) for all single-lane serdes channels of 56Gbps and higher . These lanes are used for both 50 Gigabit Ethernet in its native format, and for lane aggregation in 100 Gigabit Ethernet, 200 Gigabit Ethernet, and 400 Gigabit Ethernet.

In 2017, Spirent launched the first test system in the market for 400G based on the use of 8x50GbE PAM4 technology. Longer term, knowledge of PAM4 will be important for PHY-to-MAC emulation in any Spirent service-provider tool. Dedicated links longer than 10km may be limited to private DCI over the next two to three years, but full seven-layer OSI testing between OTN and traditional Ethernet may be a logical follow-on to today’s Carrier Ethernet, as future IEEE standards emerge.